In keeping with the our mission, The Wellesley Cancer Prevention Project’s annual recogniti 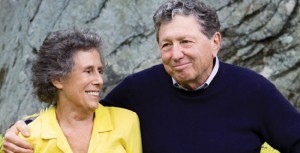 on award celebrates and acknowledges those individuals in our community whose diligence, philanthropy and passion promote education and research that will help prevent cancer and other illnesses.  It is with great pleasure that we recognize Alice & Philip Shabecoff, co-authors of Poisoned for Profit: How Toxins are Making Our Children Chronically Ill for their relentless pursuit of environmental toxins that now affect 1 in 3 children with illness.

“Some people use Google to search for information and others use Wikipedia but for me when I am looking for definitive information about environmental toxins and their impact on our health, I use the Shabecoff’s book as my guide.  One of our Board members told me she believes that this book will have as much impact as Rachael Carson’s “Silent Spring.”  Commented Linda Grifith, President of the WCPP.  “The Shabecoffs not only report facts and figures but analyze the problem down to an assessment of core values—on governmental, corporate and personal levels.”

The Shabecoff’s were awarded with a glass work of art by Simon Pierce entitled the “Spiral of Flame” to commemorate their comprehensive research and collaborative efforts to educate and inform us about environmental factors that may lead to cancer.

Alice has been quoted as saying, “Most Americans would not dream of exposing their children to poisonous chemicals or criticizing neighbors who were trying to protect their children. Their values would not permit it. But it is probably safe to say that, by and large, people running the daily marathon of life and work give little thought to the dangers that surround their children “Parents have to become educated consumers”  In their book, Philip and Alice make it clear “The first line of defense for the children is, of course, their families. Parents can do much to shield their children, including providing them as toxic-free an environment as possible.”

“As the years go by, the rates of childhood illnesses – from autism and ADHD to cancer –just continues to swell.  Philip and I were truly grateful and gratified to be honored with a recognition from WCPP…especially since we know that yours is one of the most active and effective community-based organizations in the nation.” said Alice Shabecoff in her acceptance speech.  “You know that we started on our journey because we wanted to understand why are own grandchildren were suffering from chronic illnesses; our research led us to discover their troubles are far, far from out of the ordinary.  And we find that, in the years since we first became acquainted with WCPP, the rates of childhood chronic illnesses have only accelerated.”  Some alarming statistics:

The WCPP is grateful to the The Wellesley College Club, Winston Florist and the Tom Doran trio for the lovely music and help with making our annual recognition event a great success!  We also wish to thank our WCPP supporters and guests who made contributions to WCPP via our website or by mail to help make this lovely reception and other WCPP events possible.

Philip Shabecoff was a reporter for The New York Times from 1959 to 1991, who has since specialized on environmentalism. He left the NY Times in 1999.  He then founded and, for five years, served as publisher of Greenwire, the daily online digest of worldwide environmental news coverage, which remains today a leading source of environmental news.

Mr. Shabecoff grew up in the Bronx, New York, attended the Bronx High School of Science, and earned his B.A. from Hunter College; he earned his M.A. degree from the University of Chicago.  Mr. Shabecoff has received many awards including the James Madison Award from the American Library Association for leadership in expanding the public’s right to know and was an original selectee for the Global 500 award from the United Nations Environment Programme.[2]  He also received the National Wildlife Federation’s “Connie” Award for achievement in conservation, the Sierra Club’s David Brower Environmental Journalism Award, and the Worldwatch Institute’s Environmental Leadership Award “In honor of 20 years of pioneering environmental journalism”

Alice Shabecoff is a freelance journalist focusing on family and consumer topics. Her work has appeared in the New York Times, Washington Post, Christian Science Monitor, and International Herald Tribune, among other publications. She was Executive Director of the National Consumers League, the country’s oldest consumer organization, and executive director of the national nonprofit Community Information Exchange.